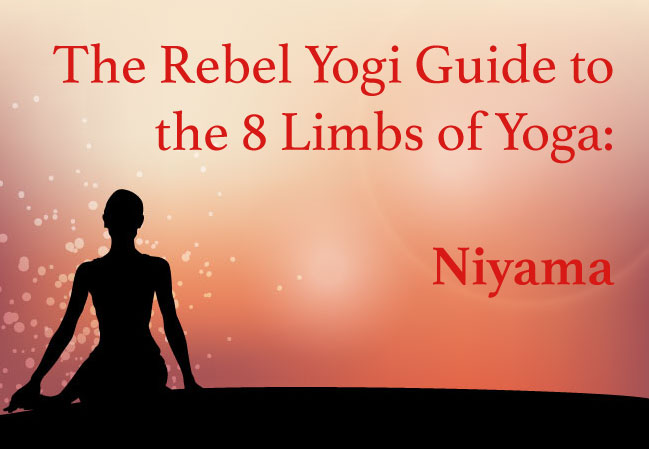 This July I want to take you deeper into the full practice of yoga. This means that we’re going to explore the 8 limbs of yoga from the perspective of the world-changer. I’ll do my best to help you answer the question “just what are these 8 limbs, and what the heck do they have to do with me?”

Last week we began with an exploration of Yama, the abstentions, and now this week we’ll move on to the second limb of yoga: Niyama, the observances.

Similar to the first post, we’ll break each of the Niyamas into the sanskrit name, its general translation, and then a quick exploration of what each means for us in this particular context. And again, look for the patterns and the places that each of these recommendations overlaps with the others.

This translates to purity of body, thought, word and deed. It can be broken down into external (the body) and internal (the mind, your attitude).

We can take this niyama literally, but also to mean embracing simplicity. When our lives are simpler, there is less to manage, and we tend to be happier. Add simplicity together with keeping the things that come into our bodies and minds pure, and we are better able to maintain a calm and steady mind. This in turn leads to generally being less stressed.

In this case, contentment means being just as we are, without relying on outside things for our happiness, to neither like nor dislike.

We can also look at Santosa as coming into right relationship with life, being able to surf the up and down waves that life brings our way. We can cultivate joy and gratitude, and focus on being present to the current moment – not living in the past or the future.

This one gets a bit more difficult to fit into a modern-society context; one literal translation means to accept pain without causing it. For this Niyama and the ones following, we’re going to take a more modern (read: less literal) exploration.

We can break this Niyama down by looking at a situation where someone says something mean or hurtful to you, and rather than retaliating or responding in kind, we simply choose to walk away from the situation. We could also look at this in a different light: as determination and perseverance through struggle, or simply the hard work that is required to attain a lofty goal.

While the literal interpretation means the study of “scriptures and spiritual texts” or “practices that we have been initiated into”, I rather like the way that Jackie Dumaine looks at Svadhyaya. To do this, we take “study” to mean self-inquiry, exploration or observation.

This can mean that we are our own ultimate guru: we have all the answers within us, but we have to sit still and contemplate long enough to find them. We can also explore why we do the things that we do, and what our behaviors mean; for example, why we set an alarm with the intention to get up at a certain hour and then hit the snooze button for 30 minutes; why we talk about doing things like getting exercise and eating well but then don’t follow up; and other behaviors of a similar nature.

Isvara pranidhana asks that we allow ourselves to flow; to do our own work, and then to get out of the way and surrender to what is and will be. We can do anything and everything as long as we do it with the idea of serving the world at large. The biggest piece of this is letting go of the things that we can’t control.

So how can the second limb of Yoga be integrated into your life, or your work? My guess is that you’re already practicing quite a bit of this without even knowing it. During the coming week, maybe try to pay attention to when and where you notice both the Yamas and Niyamas coming up in your everyday life, and feel free to get in touch with any comments or questions.

These explorations of the Yoga Sutras are being fueled by both the Edwin Bryant and Swami Satchidananda commentaries. I have also referenced the Yoga Code by Jackie Dumaine for this week’s post.