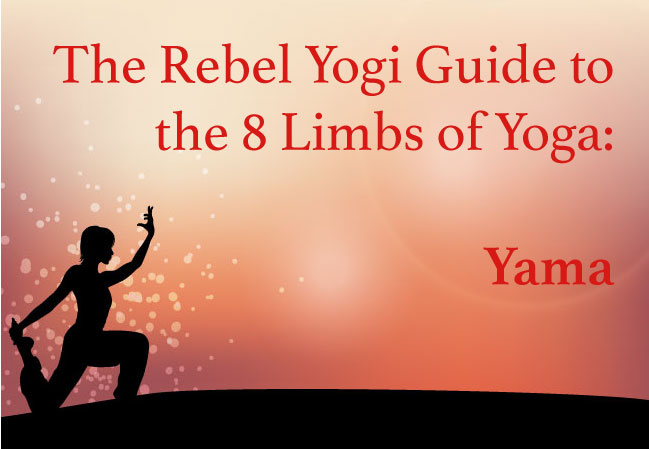 If you recall from last week’s post about Asana, this July I want to take you deeper into the full practice of yoga. This month, we’re going to explore the 8 limbs of yoga from the perspective of the world-changer. Just what are these 8 limbs, and what the heck do they have to do with me?

This week we begin an exploration of Yama, the abstentions, and next week we’ll move on to Niyama, the observances.

Yes, in a literal sense Yama refers to abstaining, otherwise known as “the things we shouldn’t do”. But before we get wrapped up in rules and regulations, just remember that these are guidelines along the path, road markers to guide our footsteps, and not absolutes. We can also look at the Yamas as external work and the Niyamas as internal work; the Yamas produce their effects without being aided by any other factors, but the Niyamas are dependent on the successful cultivation of the Yamas to reach their full effect.

Hang in there. This piece feels huge, and it’s a lot of information, but I’m going to do my best to make it as easily understandable as I can. We’ll break each of the Yamas into the sanskrit name, its general translation, and then a quick exploration of what each means for us in this particular context. You will likely start to see a pattern, that each of the Yamas interacts and overlaps with the others!

The first of the Yamas (which is the first limb of yoga) is understood to be the most important of the bunch. The literal translation means that we should not injure (or cause pain to) any living creature anywhere at any time.

What we can take away from the idea of nonviolence should also extend to ourselves; having kindness and compassion toward ourselves and others can be one of the hardest things that we do. At its root, practicing ahimsa means that we should be non-violent in thought, word and deed. This idea extends into diet, as well; in the strictest sense, a vegetarian or vegan diet is a requirement for a yogi, according to the Sutras.

This one is fairly simple in its translation – one’s words and thoughts should be in exact correspondence to fact.

This one is also pretty simple on the outside: tell the truth. But it goes a little deeper, teaching us that our speech should not be deceitful or misleading, and should be for the benefit of all others. We can also dig a little deeper to ask if we are being true to ourselves, in our lives, our actions and our thoughts.

There is one exception – truth must never cause harm or result in violence (see above for Ahimsa). If there is a conflict between two tenets of the Yamas, then Ahimsa must always take precedence. “One should not tell the truth unkindly.” According to the Edwin Bryant commentaries, this includes not always speaking bluntly and truthfully to people about their shortcomings (aka: being tactful). Truthfulness should bring benefit to someone, and harm to no one.

This Yama translates to both not stealing (taking things belonging to others) and also to not harboring the desire to do so.

We can look at this in different ways: always being on time and being respectful of other people’s time – if you’re late to a meeting, you are stealing time from someone else; another way to look at this on an individual level is to allow yourself the opportunity to reach your full potential – if you don’t, you may very well be stealing something from yourself. And, really, the world needs you to reach your awesome full potential!

Confession – the literal translation of this one is usually celibacy or abstinence from sexual indulgence, but we’re going to look at this a different way.

I think the more applicable way to look at Brahmacarya is to explain it as moderation in all things. We don’t want to eat too much, sleep too much, spend too much… Here we find the idea that we are able to figure out what “enough” means in our individual context, and then only do that much of whatever it is we’re talking about. It’s finding the balance: not eating too little, or too much, but just enough to keep us healthy and happy. It’s like Michael Pollan’s recent explanation of the diet that’s healthiest for both us and the planet: “Eat food. Not too much. Mostly plants.”

This can be viewed as the renunciation of unnecessary possessions, not accumulating beyond our capacity to use things in the proper ways.

We can also look at this one as not becoming attached to thoughts, ideas or routines, as well as possessions. The past few years have seen a rise in the minimalist movement – people who want to live a simpler lifestyle, finding freedom from “stuff” by not assigning too much meaning to our possessions, and making decisions about what does come into their lives in a very conscious manner (see this post by Joshua and Ryan of the Minimalists for a great explanation).

Whew. That feels like quite a bit to chew on, so we’ll leave the discussion here. As I mentioned above, next week’s post will begin to delve into the Niyamas, which build upon what we’ve covered today. There’s no test, I promise!

So how can the first limb of Yoga be integrated into your life, or your work? My guess is that you’re already practicing quite a bit of this without even knowing it. During the coming week, maybe try to pay attention to when and where you notice the Yamas coming up in your everyday life, and feel free to get in touch with any comments or questions.

These explorations of the Yoga Sutras are being fueled by both the Edwin Bryant and Swami Satchidananda commentaries. I have also referenced the Yoga Code by Jackie Dumaine for this week’s post.