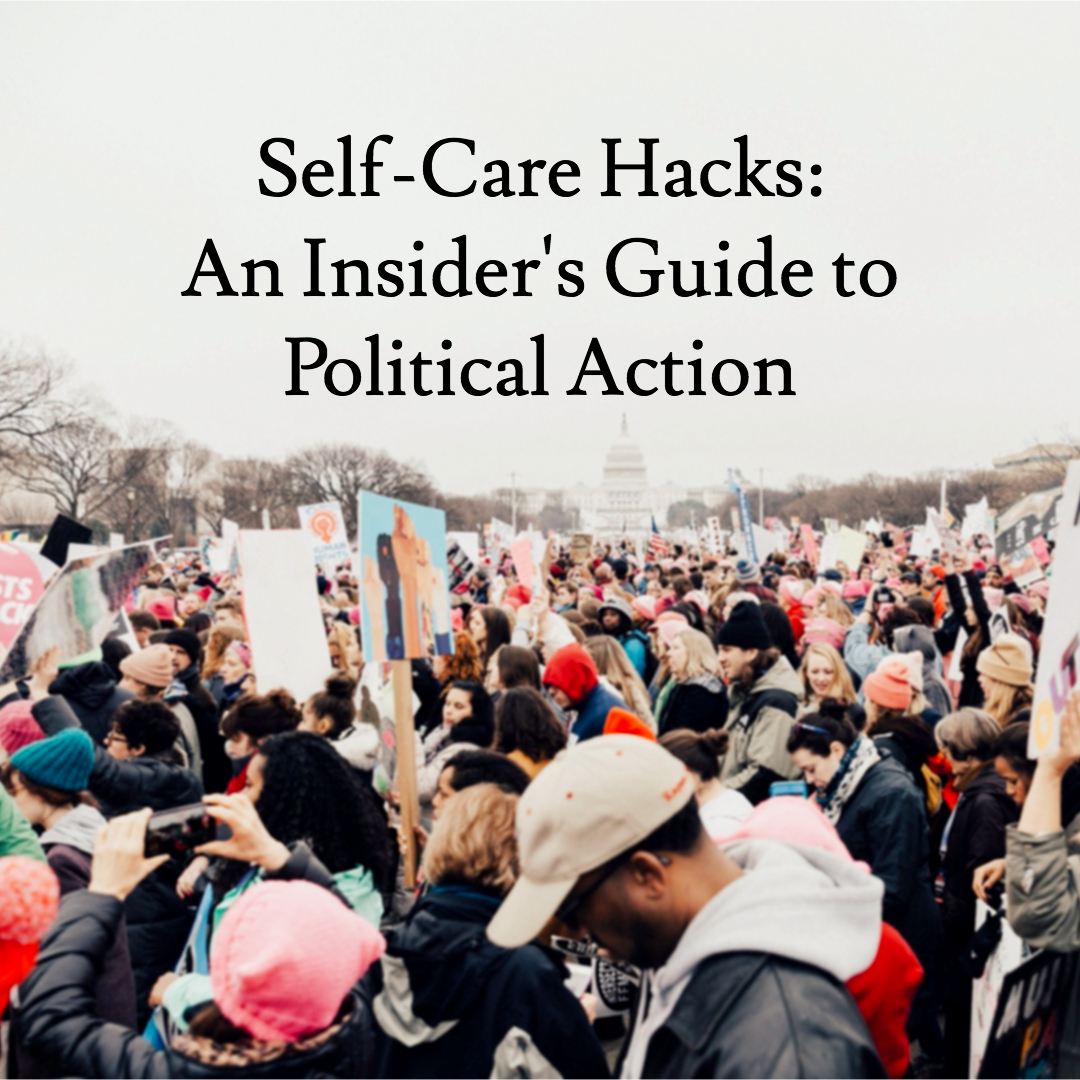 In honor of the People’s Climate March taking place this weekend in New York City and around the globe, I want to share some tips I’ve learned in my years of being involved with large-scale political action. (A note for those of you who don’t get involved with this type of thing, you can also use these same ideas when you’re traveling to large conferences.)

Let’s face it: being involved in days of large-scale action doesn’t exactly lend itself to an environment that is beneficial or conducive to self care. In fact, it’s often exactly the opposite. Long days, most often outdoors, with a stressful lead up… that often end up with us crashing afterward. We push ourselves so hard getting to the finish line that our bodies often collapse right after, leading to sickness and general exhaustion.

But what if there was a way to alleviate some of this stress, and make our participation in days of action a little bit easier on our bodies, and a little bit more fun in the process?

That’s where I’m headed with this post today, and I hope that you can make use of some (or all) of the ideas below as you head to New York or one of the solidarity events this weekend (or the next time you’re out getting your world-changing on).

1. Do your research. Find out how you’re getting to the event, and give yourself plenty of time to get there. Maybe even build in some extra time. When large groups of people converge on an area, there’s often traffic congestion – and that includes not only traffic on the road, but public transit and pedestrian traffic as well.

Giving yourself extra time will help to alleviate our number one issue: stress. Less stress getting to the event = a good start to the day!

When you’re making your travel plans, also make sure to do at least a little bit of research about the area you’ll be in. Take a minute to see where things like restaurants, coffee shops and grocery stores are, just in case you need to make a pit stop at some point during the day.

Along these lines, it may help to have a plan that’s just slightly off the beaten path. Have you ever tried to stop at a coffee shop where thousands of other people are converged? Sometimes walking half a mile can make the difference between standing in line for an hour; plus as an added bonus, you’ll get your body moving!

2. Dress appropriately. Check the weather forecast. Several times. Plan your clothing for the most likely possibility, and then check the weather again the night before you leave. You want to have a raincoat if it’s raining, or sunscreen and a hat if it’s going to be hot and sunny. And, you don’t want to have a whole lot of unnecessary gear to lug around – taking the minimum amount that you need is a careful balancing act, but it’s totally worth the extra planning time.

Wear comfortable shoes. Plan for how much walking you will be doing, between getting from transit to the event area, during the event itself, etc. How many hours will you be standing on your feet? This single item may very well make or break your day.

3. Be Flexible. You know that saying about the best-laid plans? Well, yeah. Having a plan is good, but being okay with that plan changing is a must in situations like this. If you’re the uber-planning type, have a backup plan, or a plan A, B and C. But again, be prepared to improvise. Again, we’re aiming for keeping the event as low stress as we can.

And, sometimes the unexpected adventure that finds you is exactly what you needed. Be open to serendipity!

4. Get enough sleep before the event. Hopefully you’ll be able to get in solid nights of sleep in the week leading up to the event. (Organizers, I know you’re laughing uncontrollably right now, but hear me out.) I know that there are only so many hours to get a million hours worth of things done in the lead-up, but also remember how much more efficient you are when you’re not running on empty.

Getting a good night’s sleep can mean that you’re more efficient in your execution of the things you have to do – rather than running around in a fog, you can keep a sharp mind, and the hours you have can be more effectively used.

5. Sleep on the way to the event. I know, I know – it’s hard to do, especially if you’re traveling with other people who are also super excited about the event that you’re headed to. That being said, taking a couple of hours to catch some zzz’s on the bus, the train, or in the back seat of the car you’re carpooling in can be really beneficial. Even a 20 minute nap can help.

I would recommend bringing along a travel pillow – one of those that you can roll up or squish into a tiny little bundle and strap to your backpack. They’re low weight, and take up hardly any room, but they make your travel napping so much more comfortable, and probably a lot more restful. No one likes the neck stiffness that comes from falling asleep with your head against a train window.

Or, take along the Yoga Nidra recording I made for you, and do a modified session. You probably can’t find a perfectly quiet place to lay down, but you can still do a good bit of the practice during your travel time. And think how awesome it will be to arrive at your destination all relaxed and recharged!

Nutrition (Fuel for the Body)

6. Take water. Either carry a couple of water bottles with you, or maybe a single water bottle that has a built-in filter. (I don’t travel without my filter bottle.) Staying hydrated is super important to our health, and especially when we’re outside, or traveling, or a combination of the two. Yes, it probably means having to stop by a port-a-potty during the day, but those couple of minutes aren’t worth getting dehydrated over. Seriously.

7. Take snacks. I don’t know about you, but I get seriously cranky if I don’t eat. I never, ever leave home without at least a few granola bars in my backpack when I’m headed to a direct action or large event. Even if I can’t find any other food to eat during the event, I know that I have enough in my backpack to keep me going during the day.

How many of these things do you usually incorporate into your routine when you’re traveling to events? Do you have any tips to add?

I’d love to hear them in the comments, and I look forward to seeing you out on the streets!