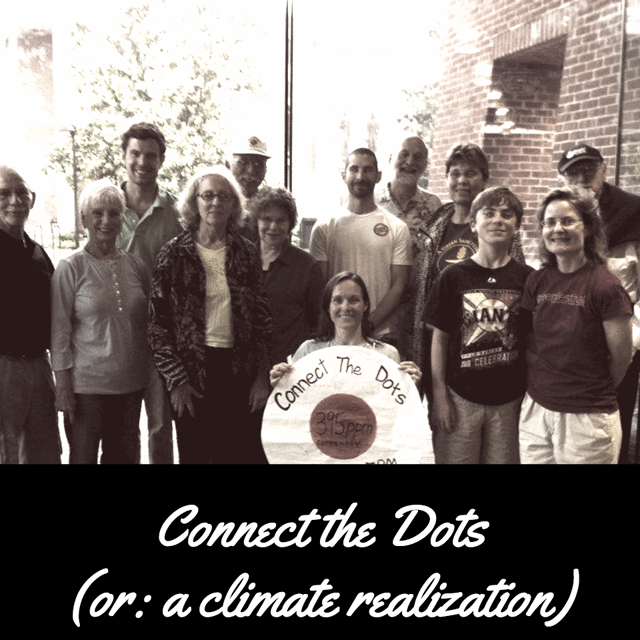 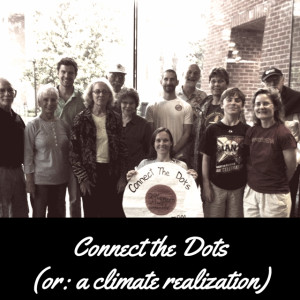 This past Saturday marked the second big environmental event in as many weeks for me. I have been a volunteer community organizer for 350.org since 2009, and when they announced plans for a day of “connecting the dots on climate change” I was immediately in, despite the quick turnaround between events.

At that point, I was still heavily involved with planning for the Eco Fair, and knew that most of my Dots planning would fall into the last two weeks prior to May 5. Little did I know that I would attend an event during Earth Week that would challenge my thinking on climate change and an entire segment of the environmental movement.

It started out simply – an invitation to attend a flash seminar given by Howard Epstein, a professor in the Department of Environmental Sciences at the University of Virginia. It was rather informal, a group of students and other UVA faculty who gathered at the newly opened OpenGrounds facility on the UVA campus. (OpenGrounds is a coworking facility, similar in style to downtown’s own OpenSpace – a place where its users can connect, collaborate and create – very cool.)

During those two hours, my understanding of climate science was turned on its head. Where I had trusted the biggest names in the environmental movement were doing their due diligence and giving it to me straight, I came to the rather uncomfortable realization that everyone puts their own spin on the issues they work. I personally am not a climate scientist. I don’t have enough time in the day to research every finding, investigate every nuance, chase every trail – I try to do my best to choose my sources of information carefully, and trust that they do take the time to do so.

Before I go any further, this is not meant to be a finger-pointing post, or to be taken as anything other than a gentle reminder to look at the big picture and get my information from multiple sources before making any decisions!

What I learned during that flash seminar was this: even climate scientists don’t know for sure what’s going to happen. While the scientific community is doing their best to model what is ahead, there is simply not enough data to make any certain conclusions. And, when a Q&A session came around, I had the opportunity to ask about the connection between extreme weather and climate change.

It’s at this point that I was shaken. What Dr. Epstein said was that the Al Gore’s of the world (to pull one big name out of the hat for the sake of reference) are taking an extreme position on the connection. Basically, correlation does not indicate causation; there is no way to make a solid scientific statement that says “yes, humans are causing climate change, and climate change is making our weather all out of whack.”

I continued my planning efforts, and joined together with one of the members of Transition Charlottesville Albemarle to pull off a well attended and well covered event. We focused on Dominion Energy and their so-called renewable energy sources in Virginia; our main talking point for the day was a call for Dominion to invest in actual renewables, to stop greenwashing and show us the green energy. We talked about the connection between climate change and Charlottesville’s lack of a winter, and Professor Andres Clarens (of the UVA Department of Civil and Environmental Engineering) spoke about ways that Virginia residents can make a difference on an individual level, contacting their local representatives to make sure that the government initiatives for wind power don’t expire soon.

It all boils down to this for me: it doesn’t matter whether or not science can predict exactly where our planet is heading – I know that we need to be more responsible stewards of her. We need to tread lightly, and be respectful of this small blue marble that gives us life. Whether or not climate change is causing the crazy weather we have been seeing, I will continue to be a part of the fight to save our planet. My hope is that humanity will begin to awaken to this fact, and if it takes a little bit of spin to make people pay attention, then that’s what it takes.

Moving forward, I will be sure to be more balanced in my information intake, but just as committed to the cause and just as willing to take a stand against those who are bent on the destruction of my home. The fossil fuel industry, the Koch brothers of the world, the deep pockets behind the scenes – those are the true villains of our time, and it’s time for a real change.