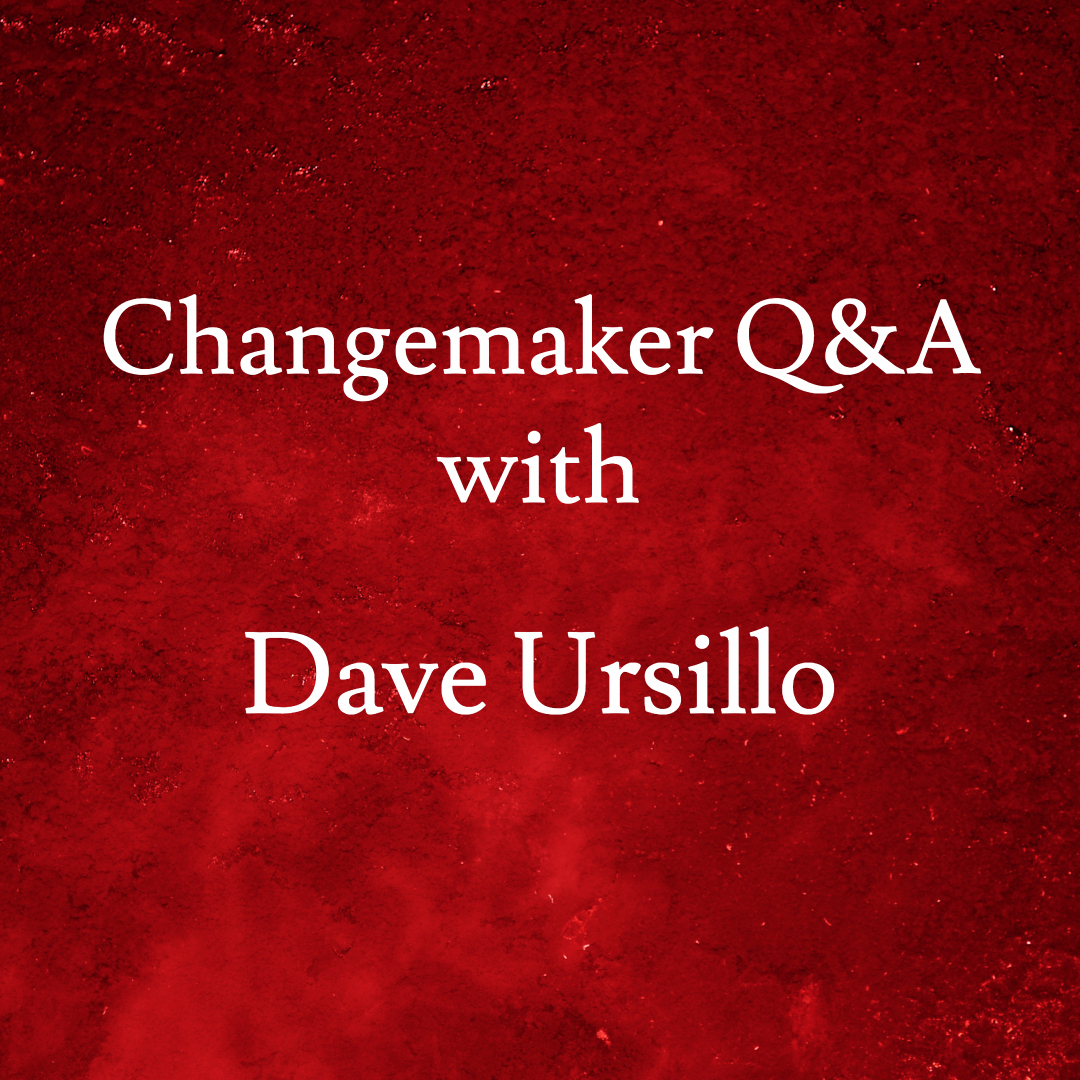 For our second edition of Changemaker Q&A we’re sitting down with Dave Ursillo. I met Dave at the very first World Domination Summit (you might see a pattern forming), and have been honored to call him both friend and mentor for the past three years. He is a fellow yogi, and is also completing his teacher training this spring.

One of the things that has struck me the most about watching Dave’s journey unfold is his honesty toward how he approaches life. It was his story about reaching the breaking point in an earlier chapter of his life that caused me to initially reach out to him, but it turns out that even now he was in the middle of figuring out a new transition point with his writing community, the Literati Writers. His is a poignant reminder that life is a constant evolution, and even the most positive of projects can start to break you down if you’re not mindful of where you really want to be headed.

Take it away, Dave!

1. What is the world changing work that you are bringing into existence? (Tell us a bit about what your work means to you and why you think it’s important for the world.)

I help self-starters embrace the arts of writing and self-expression to become stronger, happier and healthier communicators. I’ve been a writer for most of my life and a self-employed entrepreneur since 2009, but I only began this iteration of my creative work in 2012 when I founded an online writers’ group and support system for creative people called The Literati Writers.

I founded this community to help writers who wanted to love their creative journeys and find a sense of alignment and integration with their values, rather than resort to the “tortured artist routine.” As a creative, I’ve learned the hard way that pursuit alone is not enough: pursuing dreams and goals never left me happy, only wanting more; it never helped me feel fulfilled, only empty.

I started to change by focusing on the journey, itself: finding artistic integrity on my path and heart-alignment in my work. It’s all about deeply honoring our callings while helping to serve and better the lives of others.

2. What was the moment or situation that made you realize the way you were approaching this work was unsustainable? And, how did you find your way back to balance out of those challenges?

Interestingly, I founded The Literati Writers in 2012 when I realized my business was starting to fail *and* that my own commitments to writing were falling by the wayside. My excuse was a very real one, and a very important one: the need to make money. That was my reality, and a circumstance of living in New York City. But, it was also my excuse to put writing on the side-burner.

Over the last two years, The Literati Writers has called home to more than eighty writers from seven countries. We published a book in 2013 that was scooped up by more than 3,000 readers. And yet, ironically, I realized in early 2014 that my own community, which was a saving grace for my business, has itself needed to evolve because it was no longer sustainable for me.

As our goals and needs change, we have to change the projects, visions and endeavors that we’ve made into our own saving graces. But in my heart I realized that I needed to make a serious change to help my work remain sustainable, while creating the impact for others that I desired.

3. What are you doing differently now – how are you maintaining a balanced place moving forward?

I’ll tell you how I decided to retool my own writers’ group: for the group to remain viable, growth was needed. I needed membership growth to be making more income from the community, and I saw the need for new members to infuse the community with new excitement, energy and peer-to-peer connections.

The problem was that relying upon pure membership growth to help sustain my business ran in direct contrast to what makes me feel alive–and what makes me truly love my work.

The community could have grown to more than 100 members as I had intended, but it would dilute the quality my work and ultimately dilute the communal feel of my writers’ group. That’s when I knew I had to change course.

4. If you could give that past self one piece of advice or guidance, what would it be? Or, if you wouldn’t change anything, why not?

First, give yourself twice as much time as you think to complete something.
Second, work twice as focused. Be diligent with your time, and mindful of your attention.
Third, emphasize three “things” that you want to be, or do. Leave the others by the wayside.

Dave Ursillo is a writer and creative entrepreneur who helps self-starters make their lives’ journeys more rewarding. As a former politico who has walked in the West Wing of The White House, Dave teaches the art of writing and self-expression to help men and women serve the world around them, everyday. He is the founder of communities like The Literati Writers and The U Crew, and teaches writing workshops across the US. As an eight-time published author, Dave has written over 350 essays at DaveUrsillo.com and has been seen on CBS News Sunday Morning, ZenHabits, Inc.com and Chicken Soup for the Soul.