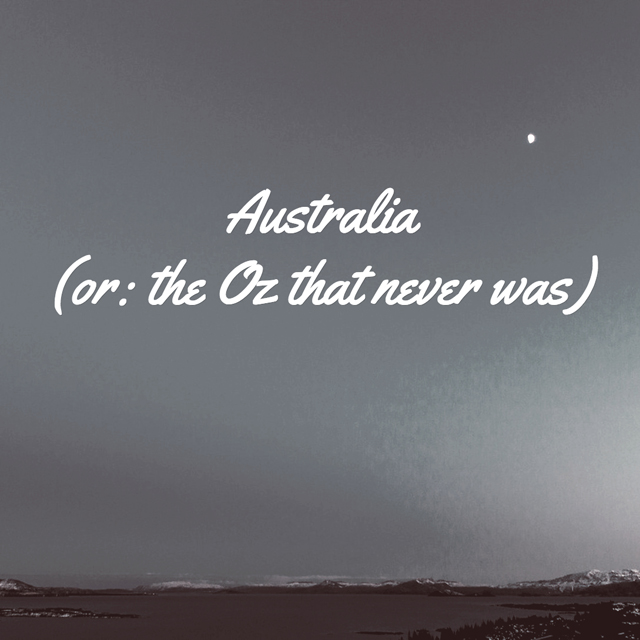 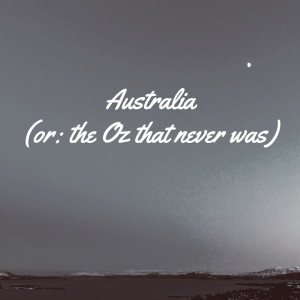 One of the stories that I end up telling on a fairly regular basis when I meet someone new is about the time that I almost ended up moving halfway across the world, and how that *not* happening changed my life.

You see, back in 2007 my now-ex husband was working as a software engineer for a company that supported a military installation in our city. The Australian government decided that they wanted to purchase the software that the company developed, and the company decided that they needed someone to go to Australia from the US to support the software. My husband was chosen to be the lead on this particular project.

We sat down and decided that we were young, and if not now, when? We signed on fully with the project, which anticipated sending us to Canberra, Australia for a minimum of three years but with the potential to be a permanent move. Looking at those numbers, we decided that the best decision we could make was to think about it as permanent, and uproot from the area where we had been living.

At that point, I had been teaching private music for a local studio for almost three years, and had built up a studio full of amazing students. It was one of the hardest decisions I had made to that point in my life, but I decided to hand over my students to other teachers at the end of the summer, since we were supposed to leave the country mid-semester. It was heart-wrenching, telling these young souls, many of whom I had been teaching for all three of the years I had been with the studio, that I was moving halfway across the globe.

My husband and I made a few more decisions to make the transition simpler. We put the house we owned on the market, during one of the worst housing markets in years. We donated almost half of everything we owned to Goodwill – no reason to have stuff just sitting around that we might never come back to.

We even found a home for our two dogs, knowing that the process of quarantine to get animals into a country like Australia was not to be taken lightly (not to mention the almost 24 hours on a plane!). A friend of ours who owns a male German Shepherd agreed to take the dogs on as his wards. We would make our move, and when we had a better idea of the time frame, we would make a decision about whether the dogs would make the transition with us. I cried for weeks about the prospect of leaving the dogs. Every time I thought about not seeing their fuzzy little faces, it would send me into another round of sobbing.

As the months progressed and we got closer to the move, things were moving along nicely. There were some questions about who else was going to make the trip from my husband’s company, and how long they would stay on, but there were very few questions or hiccups in the process. Meetings were held, teleconferencing across the ocean, with everything moving forward smoothly.

Fast forward to a day two weeks before we were to move.

In the morning, my husband went to work as normal, with a conference call scheduled to work out some final details. I was to meet him for lunch after his call; I ran some errands beforehand, gathering medical records and doing some last minute preparation for the trip. We met for lunch, and it was then that he broke the news.

I remember quite clearly the exact table where we sat on the outdoor patio, the feeling of watching our plans crumble away, trying desperately not to break into tears in this public arena.

What had happened during that routine conference call was that the contract had basically fallen through. I still don’t know all the details, but at that point, there was still some hope that things could be patched up, and that our trip might just be delayed.

That day began the waiting game. It was late August or early September when the fateful conference call took place. Over the next few months, we waited. There were several points at which we thought that things might come together, but to no avail.

My husband went to work every day, and I tried to find ways to keep from driving myself crazy. Potential buyers came and went (yes, the house was still on the market), I spent most of the month of November immersed in my first National Novel Writing Month, and we waited.

December, and hope was fading. At the end of December, we finally sold the house. The process moved quickly – I had all of two days to find a rental place for us to live, and we ended up moving into the city to a townhouse that backed up to a wooded area of the city, with trails laced behind the complex.

Through January and February there was talk of moving to England from the company, but at this point we just laughed off any talk about relocation actually taking place.

The story moves on from there, but that’s one for another day. It took time, but the bitter taste finally faded from the experience. My husband ended up taking a job with a small software development company in the same town after a few more years of working for the same company that almost moved us across the world.

I look at the silver lining of the experience now – the fact that it shook us out of the house in the middle of nowhere, that it inspired me to take a job with an environmental non-profit (which eventually led to me going back to school and starting my own business).

I look back, and do wonder what life would have been like had the Australia saga never occurred.

I try not to look back and question the what ifs. “What if” can drive a person crazy.

Instead, I try to focus on the silver linings, and think about the amazing opportunities that have opened up because our lives were shaken up.

How about you? Have there been experiences in your life that shook things up, or times that things that *didn’t* happen have changed your life?